Bright Rinascente posters declare: “We also believe that the contribution of each of us is important so that we can return to normal as soon as possible. Breaking the rules is no longer fashionable. Respecting them has never been so cool.” 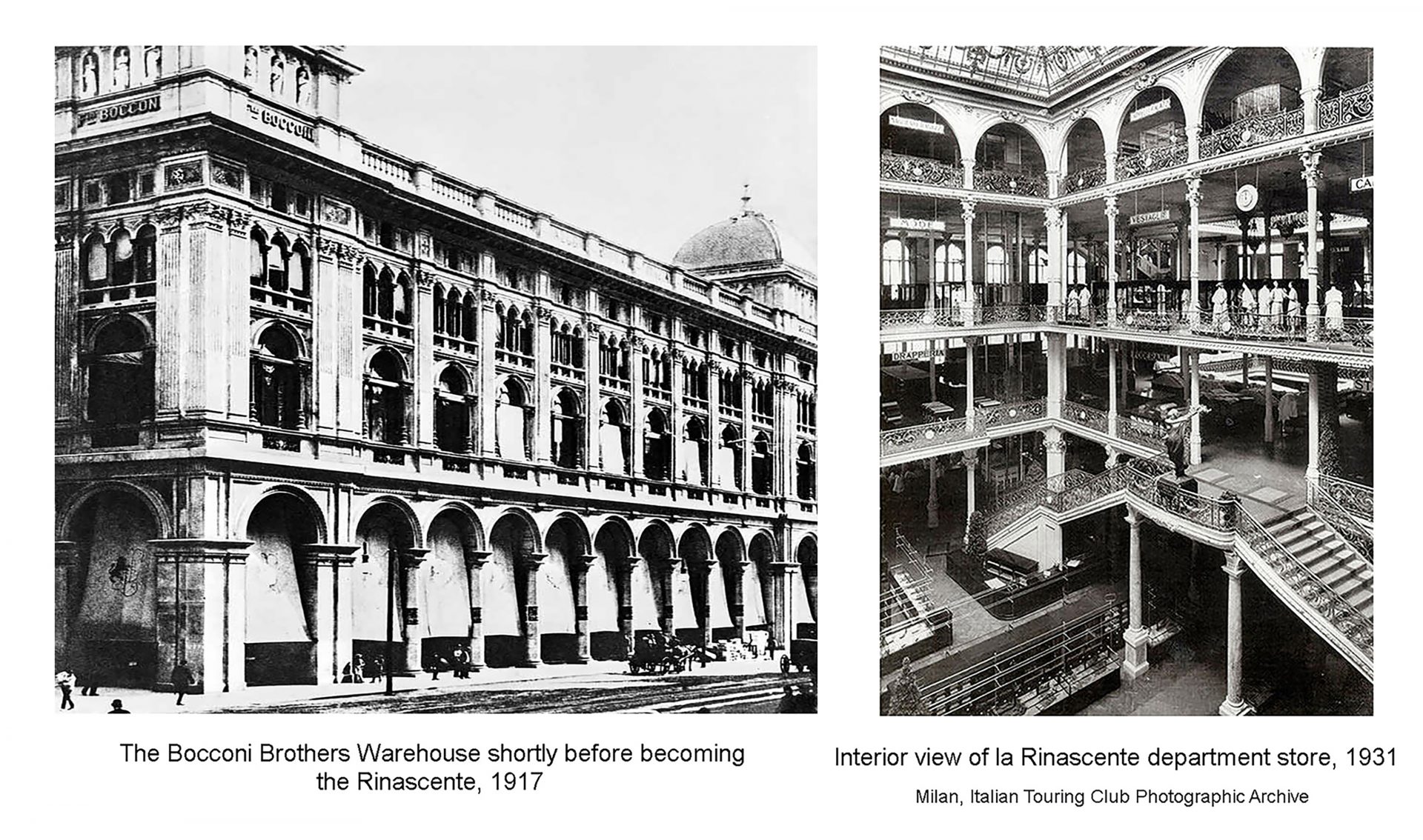 The legendary Italian Grande Magazzino (department store) was always above the rules, breaking them. Its founders, brothers Luigi and Ferdinando Bocconi, strived to be at the forefront their entire lives: Luigi fought with Garibaldi and Ferdinando took part in the war against organised crime. Right from the start, the brothers showed how innovative they were by using electric lighting to illuminate their small shop window as a way of attracting the attention of passers-by. They experimented with every means of communication to advertise their products, including dropping promotional flyers from a hot-air balloon. They also introduced the “fixed price” concept, once again proving to be real forward thinkers.

Their first fabric and tailoring shop opened its doors on June 4, 1865, on via Santa Radegonda in Milan. By the following year, they employed more than one hundred workers, tailoring off-the-peg suits for men. The period was marked by urban change, which brought about new and modernized business and social models. Shops became more and more specialized according to the type of merchandise they sold. Bocconi Brothers retail chains appeared all over the country. One after the other, there were Magazzini Bocconi stores opening in Milan, Rome, Genoa, Turin, Palermo, Naples, Venice, Florence, Bologna, with a purchasing office in Paris. Following the example of the famous French department store, Le Bon Marché, the brothers opened their new store in Rome’s Piazza Colonna in 1887 (designed by Giulio De Angelis) and in 1889 a new store was opened in Milan’s Piazza Duomo (designed by Giovanni Giachi). They represented the first buildings in Italy solely built for commercial purposes, with large rooms and a wide array of products. The most important goods were put on displays that were clearly visible from the street and inside the stores.

Modern and functional with big, high windows set between iron columns, it was a combination of avant-garde architecture and retail space. Casa Bocconi from the weekly magazine, “L’Illustrazione Iitaliana” described the opening of the store in Milan as a great event: “A throng of thousands of people came for days from every part of the great capital of Lombardy and from the nearby towns and villages to see the new location built by the Bocconi Brothers in Piazza Duomo to host their department store. It was a tribute of admiration to the grand and majestic outcome of the project “Alle città d’Italia”. Next to the magnificent creation of medieval mysticisms, by the monument made of marble, stood the large glass and iron building, an enormous shop, that in a single glance and turn of the eyes revealed all the details of its dynamic, frenetic life”.

After the death of Ferdinando Bocconi in 1917, the Magazzini Bocconi was sold to Senatore Borletti who created the Società Anonima La Rinascente, a company that was reborn as a new business. Famous Italian poet Gabriele D’Annunzio was commissioned to find a new name. His suggestion was La Rinascente, a name to convey the idea of its “rebirth”. This name became prophetic because the brand La Rinascente experienced a true resurgence.

On September 27, 1917 the grand opening of the updated store in Milan took place. Unfortunately, La Rinascente, formerly Palazzo Bocconi, was destroyed soon after by a fire on Christmas night.  “All night and all morning and even in the afternoon the flames flared up here and there. But the robust external frame of the building was salvaged, together with the magnificent façade, apart from the lateral domes that had burnt like enormous torches from the first hour of the disaster” (“Il Sole”, December 26-27, 1918). The following days, Borletti assured that “La Rinascente… will emerge more beautiful, greater and stronger than before”. It was true. Three years after the fire in 1921, the store had been completely rebuilt, enlarged, transformed and expanded to include a variety of additional services such as a bank, a hair salon for women and men, a tearoom with an orchestra and a post office. The well-known poster created by Aldo Mazza for the reopening of the store, depicted a burnt trunk of an olive tree from which new green branches sprouted, was a symbolic reference to the concept of rising from the ashes.

The second “rebirth” occurred after great losses during World War II. La Rinascente stores in Genoa and Cagliari were completely destroyed. The store in Piazza Duomo in Milan was practically demolished, but the recovery was rapid and vigorous. In 1950, the famous store opened once again in great style. The facade and the interior were completely updated. During this time, La Rinascente sold a great number of innovative products imported mainly from the US. Its social and marketing activity were maturing. The legendary Italian Grande Magazzino had become a favorite among the public. Consumers enjoyed a series of cultural events, which gave the public a glimpse of what was happening around the world. In 1963, noted French fashion designer Pierre Cardin signed a contract with La Rinascente to create a line of moderately priced garments, declaring that high fashion should be accessible to all, independent and in step with the times. So. the initial idea of Senatore Borletti for a “democratic” approach to luxury was implemented – it attracted customers of both the high and middle-low income classes.

The third “rebirth” of the La Rinascente was an architectural event. In 1957 La Rinascente commissioned the Albini-Helg studio to design a new store in Rome. The two designers were students of Milanese culture which, at the beginning of the modern movement in Italy, had defined itself with very different characteristics from the Roman. “When working on a project in Rome, in an exceptional environment filled with memories and history, the search for a piece of architecture that respected the city, interpreted some of its salient features, and was at the same time an authentic contemporary expression was the dominant creative energy. This search entailed numerous aspects: volume, structure, divisions, materials, colours, and details”. (Interview with Franca Helg “Albini-Helg La Rinascente. The architectural project. Designs and the project of the Rome Rinascente”, 1982)

”The building for the second La Rinascente in Rome in Piazza Fiume was conceived keeping the particular constraints of this new architecture in mind: clear urban development restrictions, which imposed very specific spaces and precise volumes, that could be handled by symmetrically adopting the line of existing buildings on the upper façade; restrictions on intended use, due to the department store requiring large undivided rooms and decentralised stairs and service spaces; structural restrictions that required having large lights to allow for the maximum use of space and floors of minimum thickness; and system installation restrictions relating to the large number of specific equipment required by a large department store, which is also needed for certain architectural solutions.” (Franco Albini and Franca Helg Cronache Rinascente Upim”, anno XV, numero XV, 1961)

Another “rebirth” occurred in September 2017 and concerned the brand name. Just before the October inauguration of the recent Rome flagship store La Rinascente revealed its new logo, all in upper case and without the definite article “la”. The new logo is fresh and contemporary and befits the entire Rinascente story as well as the refurbished 8-story building on Via del Tritone. It was opened after a complex renovation work that lasted 11 years, so that its architecture was in perfect harmony with the historical and cultural wealth of the territory. The most extraordinary feature of this building is an open to the public archaeological site. This ancient artifact Aqua Virgo still works today, after twenty centuries, and feeds almost all of the most impressive fountains in the historic center, including the Trevi Fountain. The store also incorporates a small building dating back to the 1900s called the “Palazzetto”.

The new story of the legendary Rinascente brand continues. Quarantine has forced the fashion industry to suffer a setback: the uncertainty of the future, the economic difficulties, and the simple requirement to stay at home, are not motivators for people to shop. But in the words of Valentino’s creative director, Pier Paolo Piccioli “we’re moving forward together stronger than ever. What’s happening must not stop us from dreaming.” The king of Italian fashion, Giorgio Armani echoes him: “I see this crisis as an opportunity to slow down and realign everything; to define a new and more significant panorama for fashion.”

So, fashion design as well as fashion retail are changing. What will be the new rinascente? We will see…

We use cookies on our website to give you the most relevant experience by remembering your preferences and repeat visits. By clicking “Accept”, you consent to the use of ALL the cookies.
Do not sell my personal information.
Cookie Settings Accept
Manage consent

This website uses cookies to improve your experience while you navigate through the website. Out of these, the cookies that are categorized as necessary are stored on your browser as they are essential for the working of basic functionalities of the website. We also use third-party cookies that help us analyze and understand how you use this website. These cookies will be stored in your browser only with your consent. You also have the option to opt-out of these cookies. But opting out of some of these cookies may affect your browsing experience.
Necessary Always Enabled
Necessary cookies are absolutely essential for the website to function properly. These cookies ensure basic functionalities and security features of the website, anonymously.
Functional
Functional cookies help to perform certain functionalities like sharing the content of the website on social media platforms, collect feedbacks, and other third-party features.
Performance
Performance cookies are used to understand and analyze the key performance indexes of the website which helps in delivering a better user experience for the visitors.
Analytics
Analytical cookies are used to understand how visitors interact with the website. These cookies help provide information on metrics the number of visitors, bounce rate, traffic source, etc.
Advertisement
Advertisement cookies are used to provide visitors with relevant ads and marketing campaigns. These cookies track visitors across websites and collect information to provide customized ads.
Others
Other uncategorized cookies are those that are being analyzed and have not been classified into a category as yet.
Save & Accept